4 GORGEOUS BEDROOMS TO CHOOSE FROM! 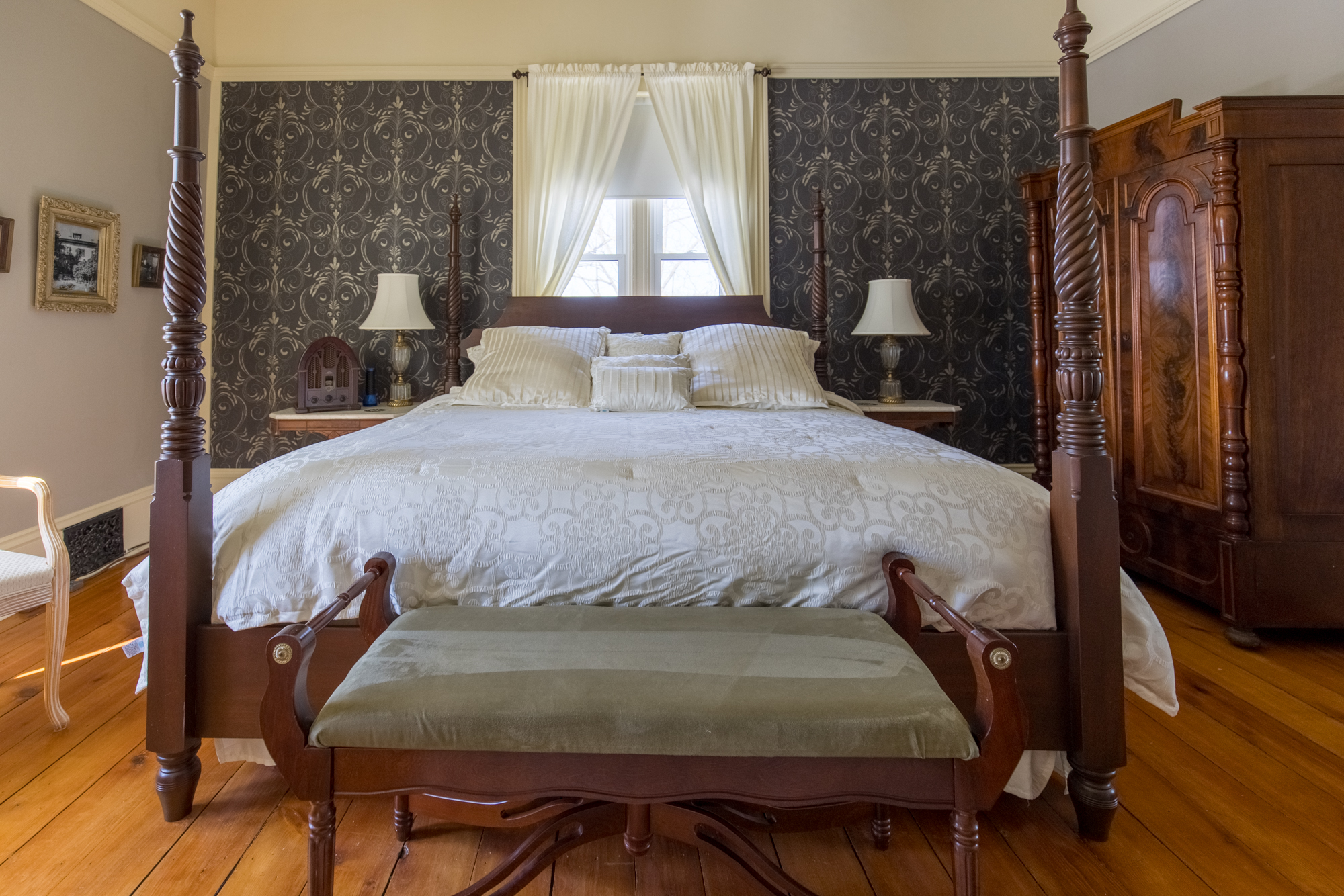 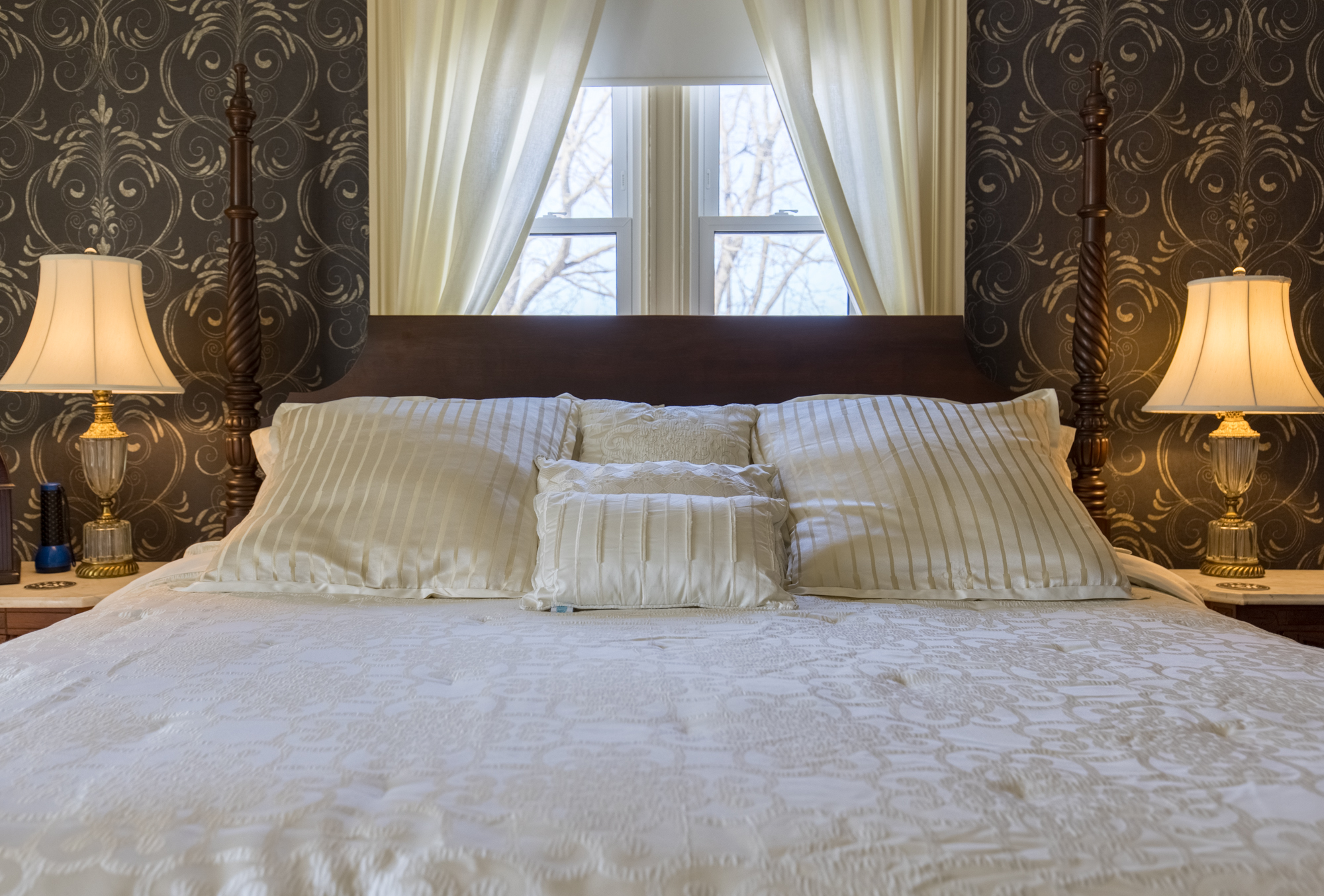 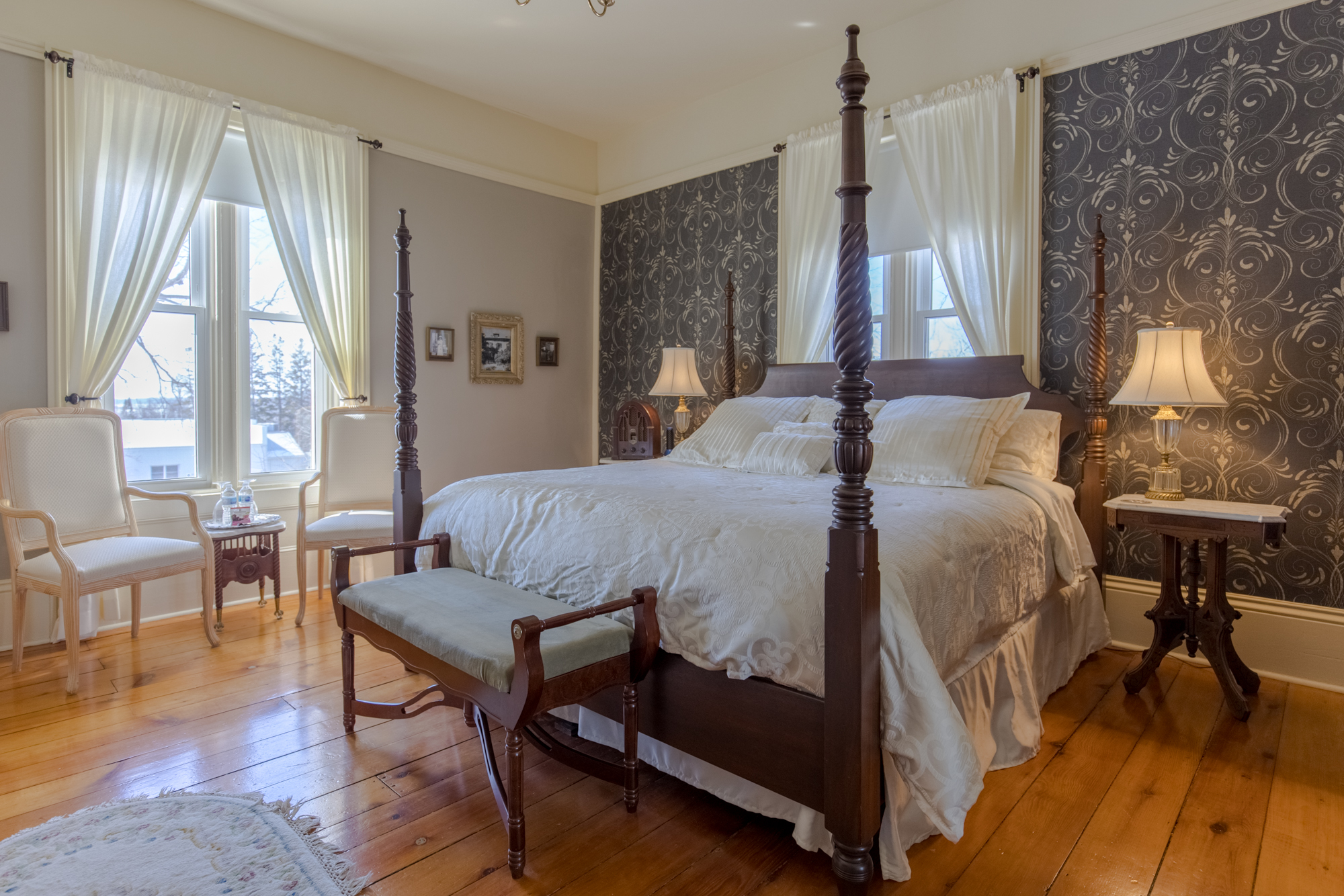 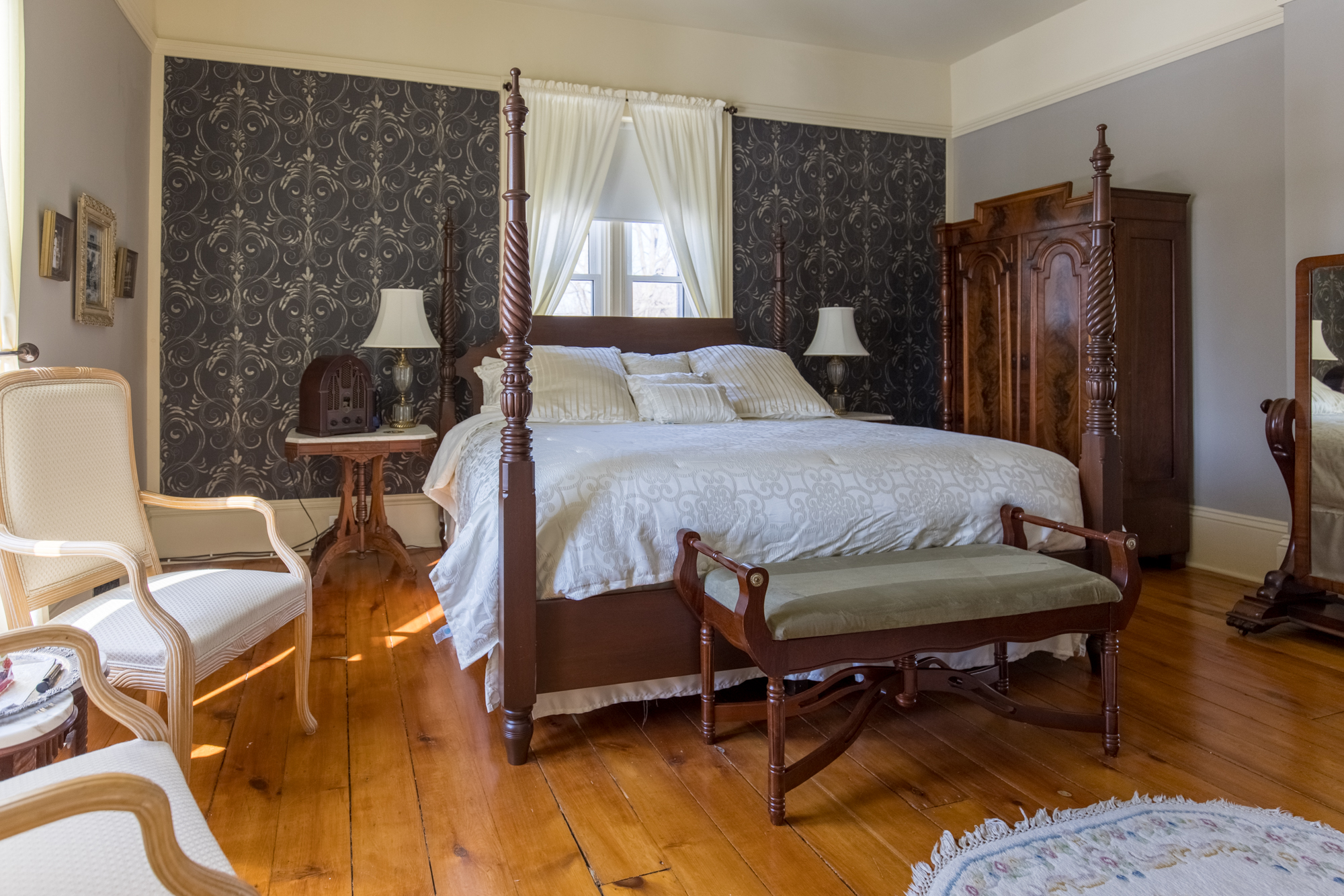 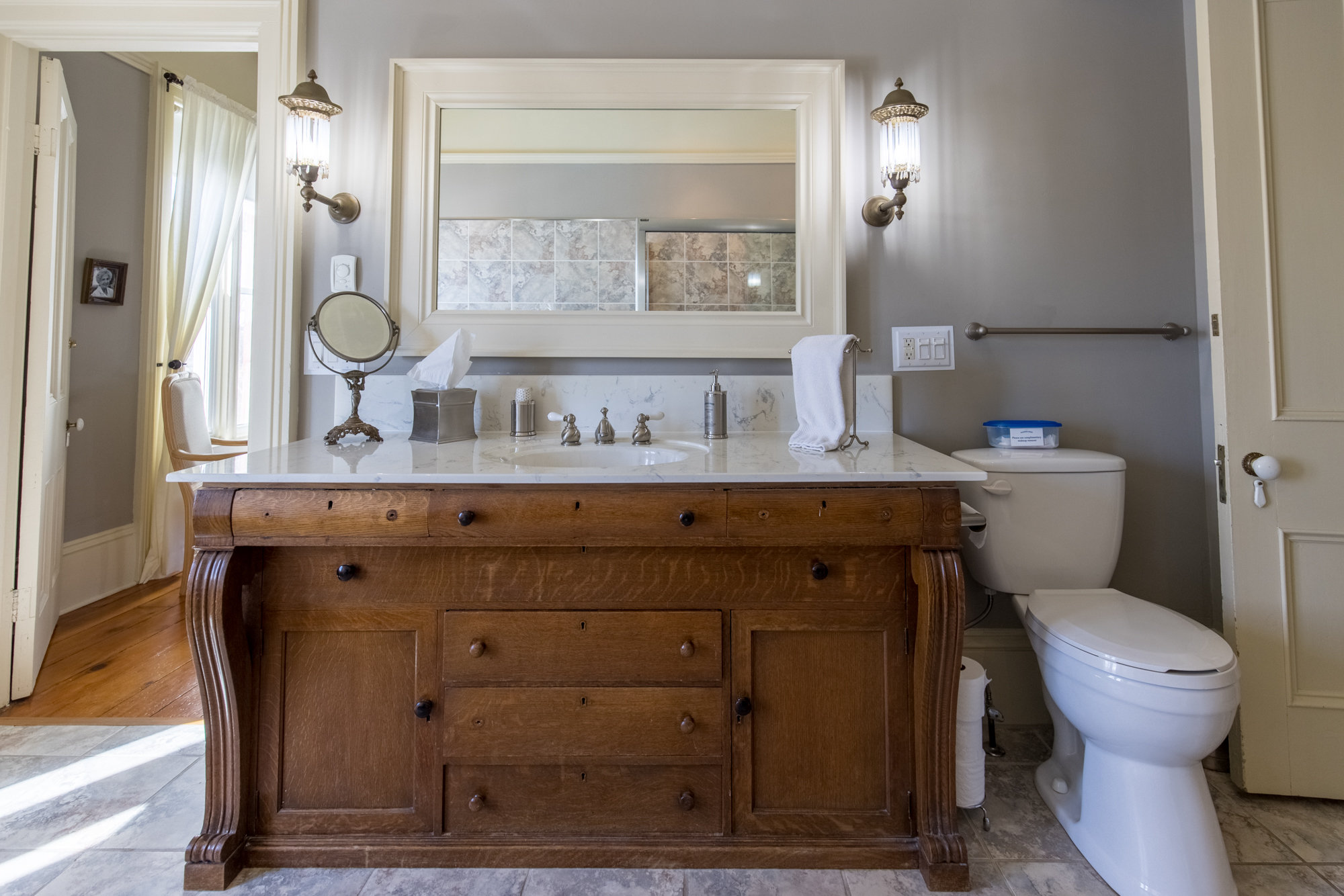 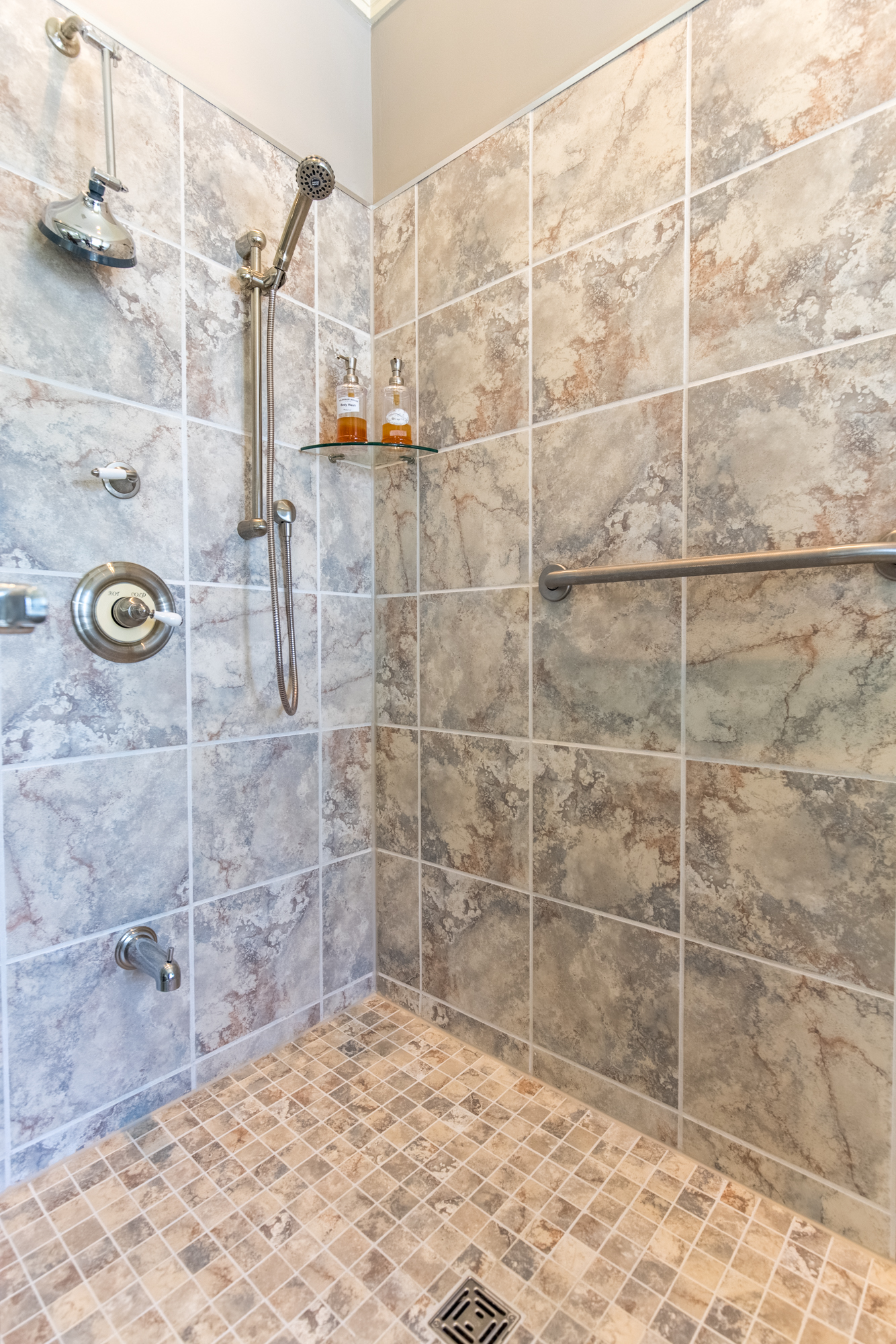 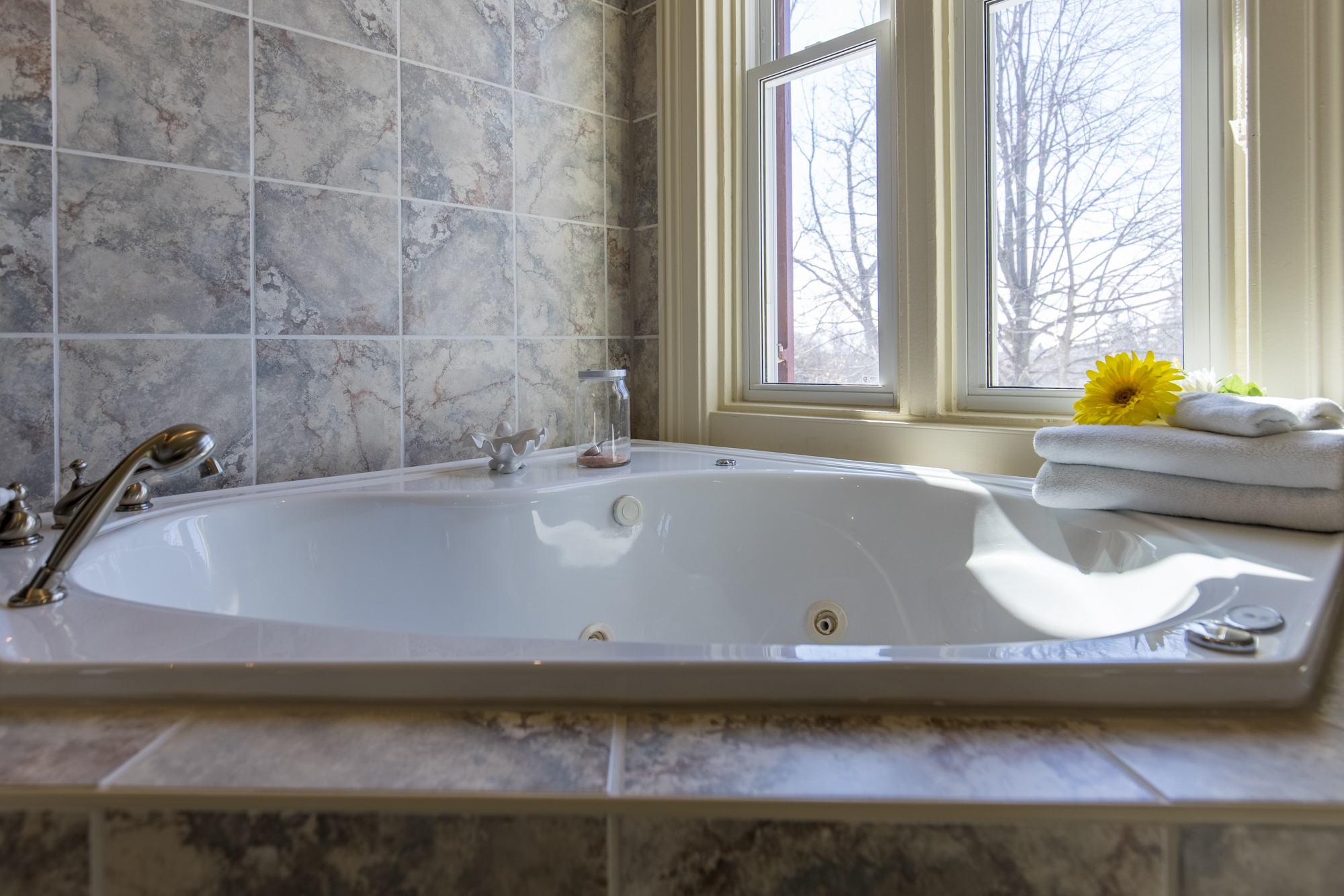 The antique armoire of flame mahogany (1840) and the bedside Eastlake marble table (1900) reflect the Victorian age. The bed is new and was built by the Mennonites in 2004, in a Victorian style. King size beds were not common in the Victorian era and we wanted this room to be comfortable! 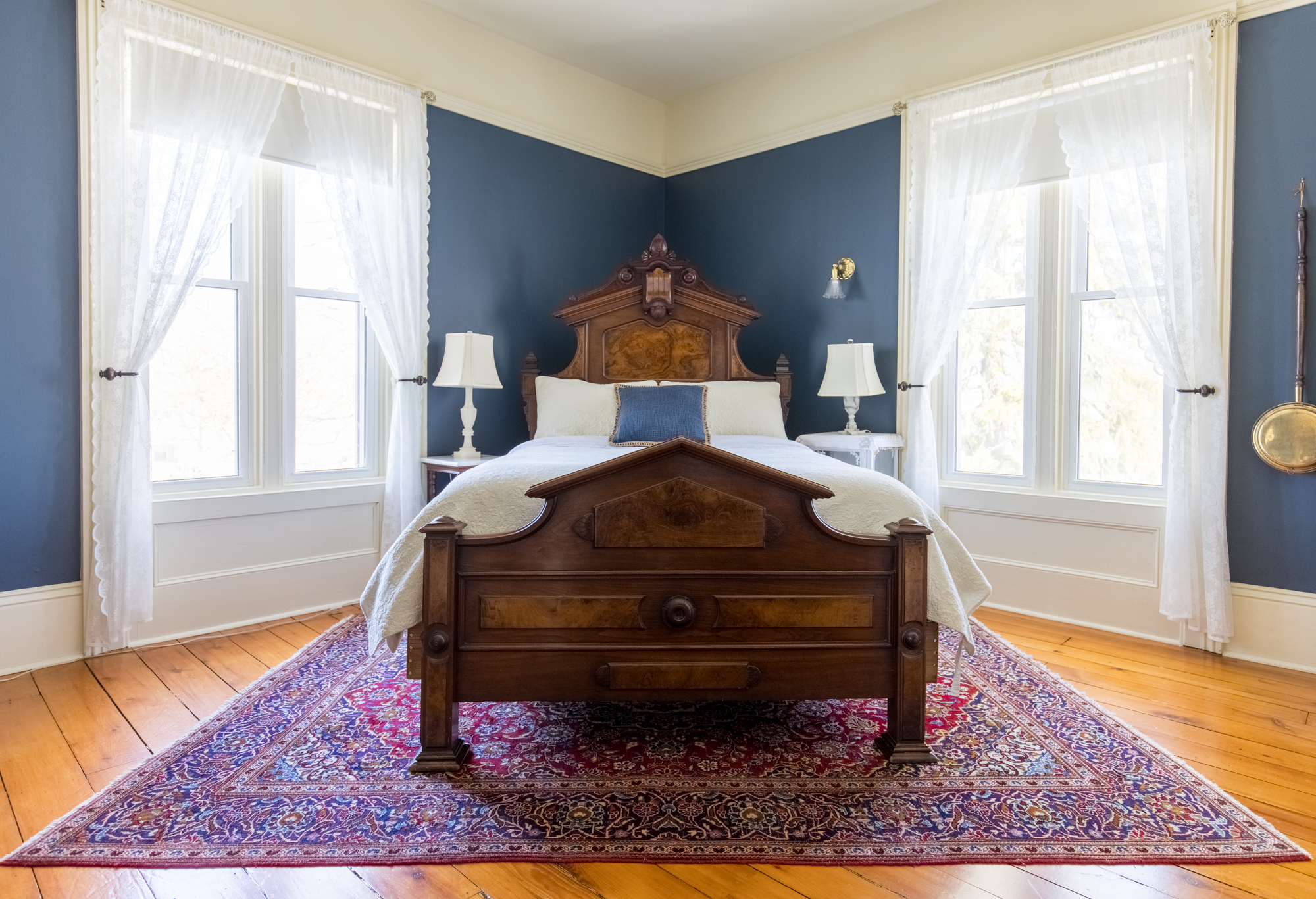 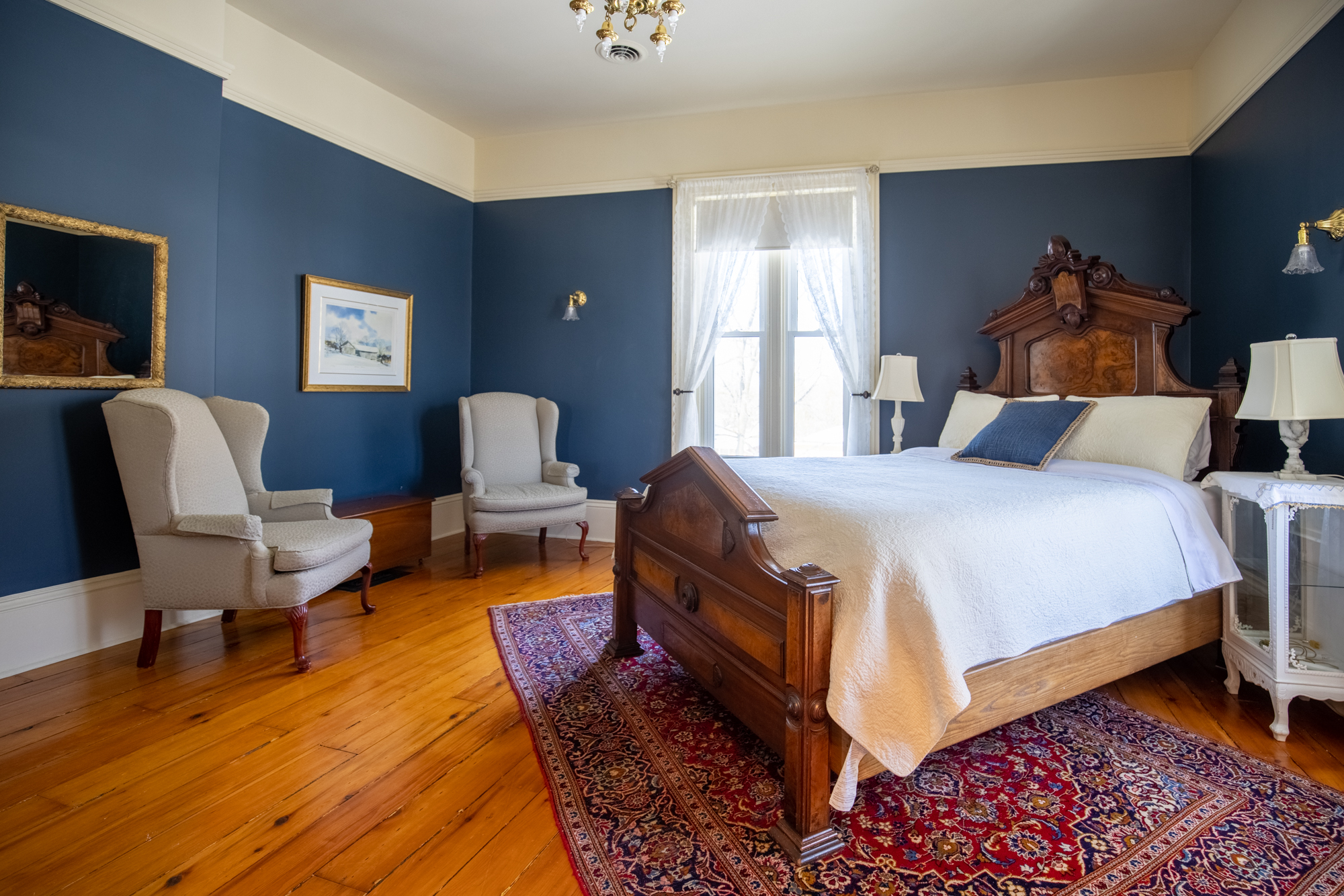 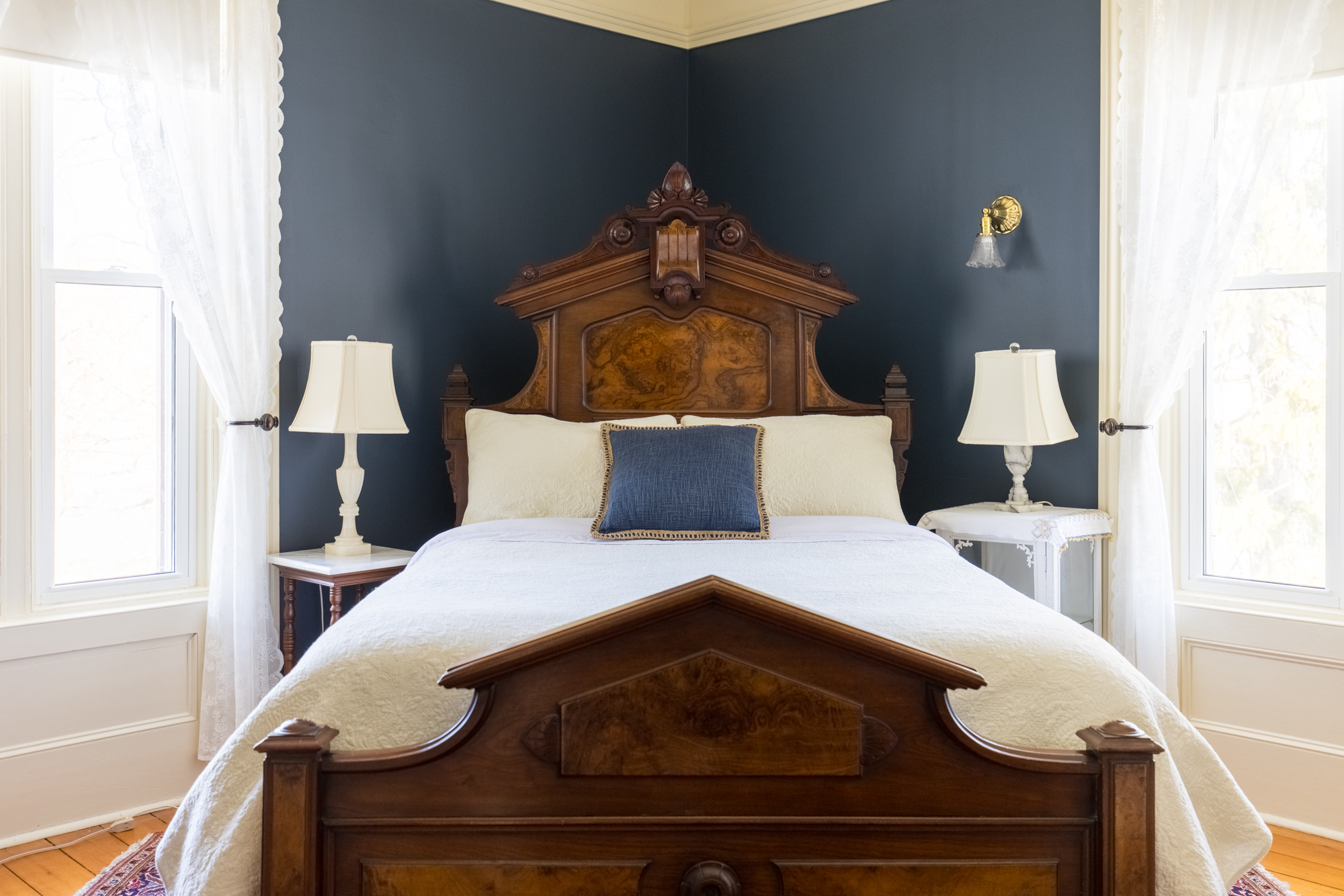 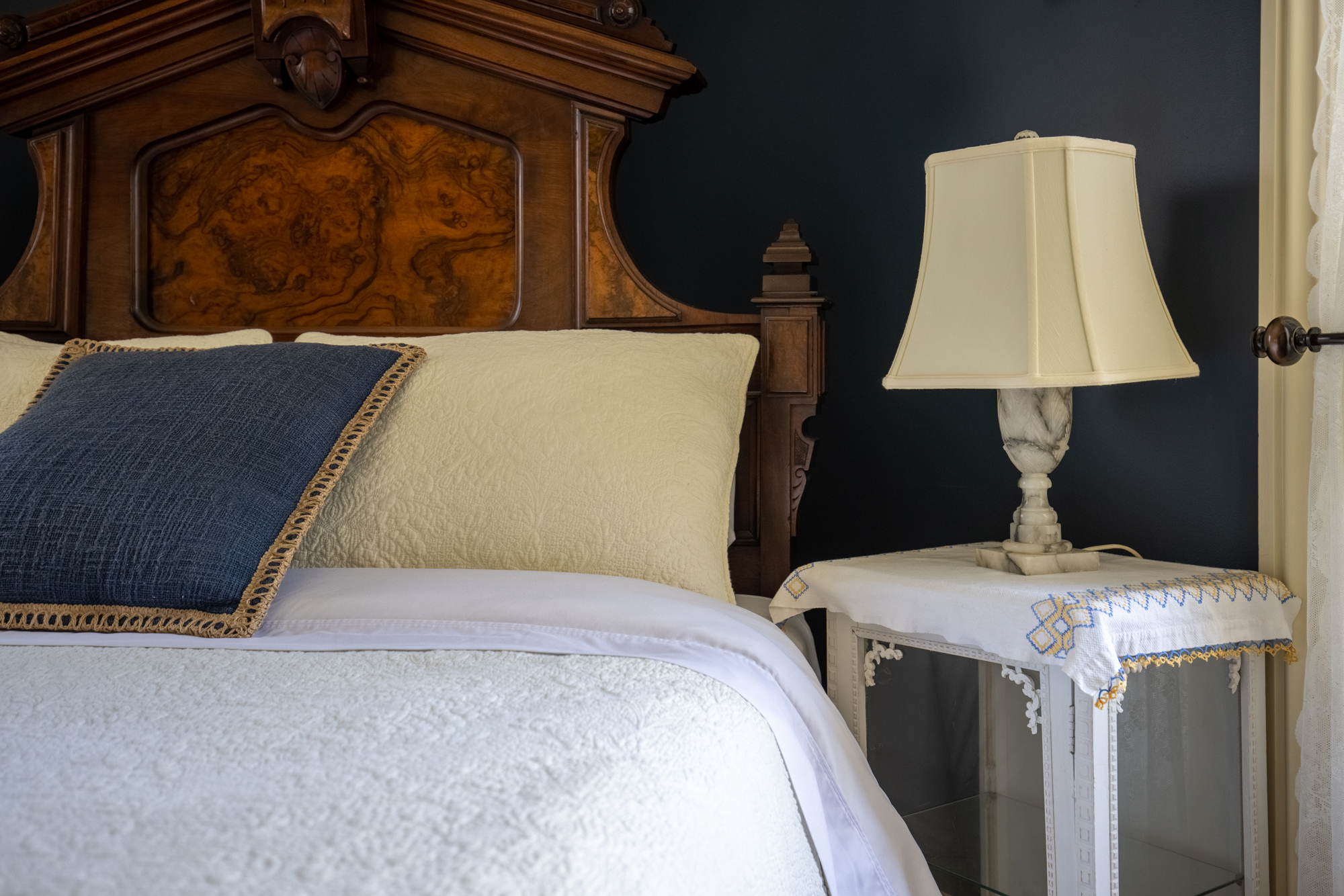 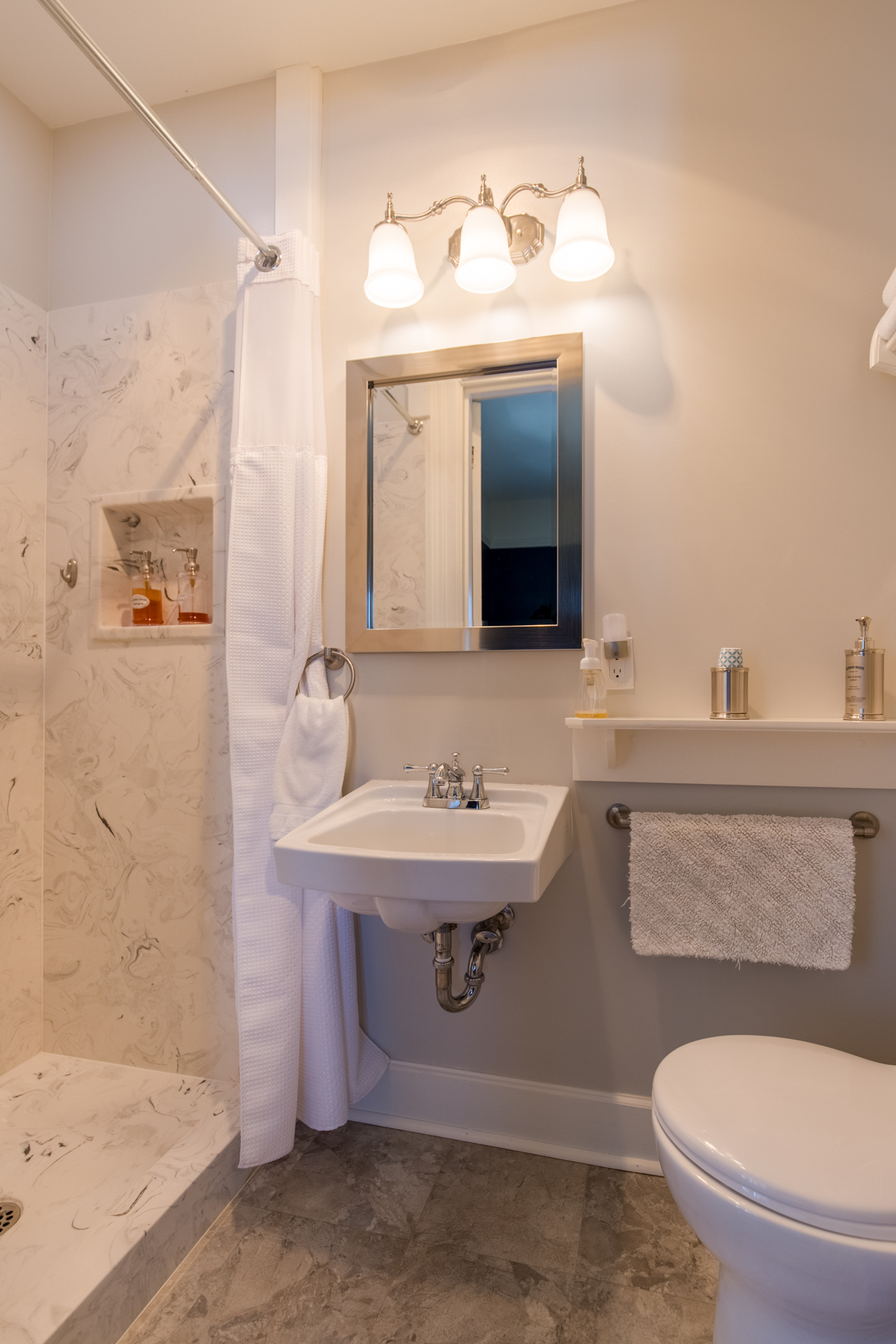 This room was remodeled in the mid 1980’s when the house was first converted into a bed and breakfast. The antique burl walnut bed has been modified to hold a queen size mattress. Queen size beds were not common in the Victorian era and we wanted this room to be comfortable! 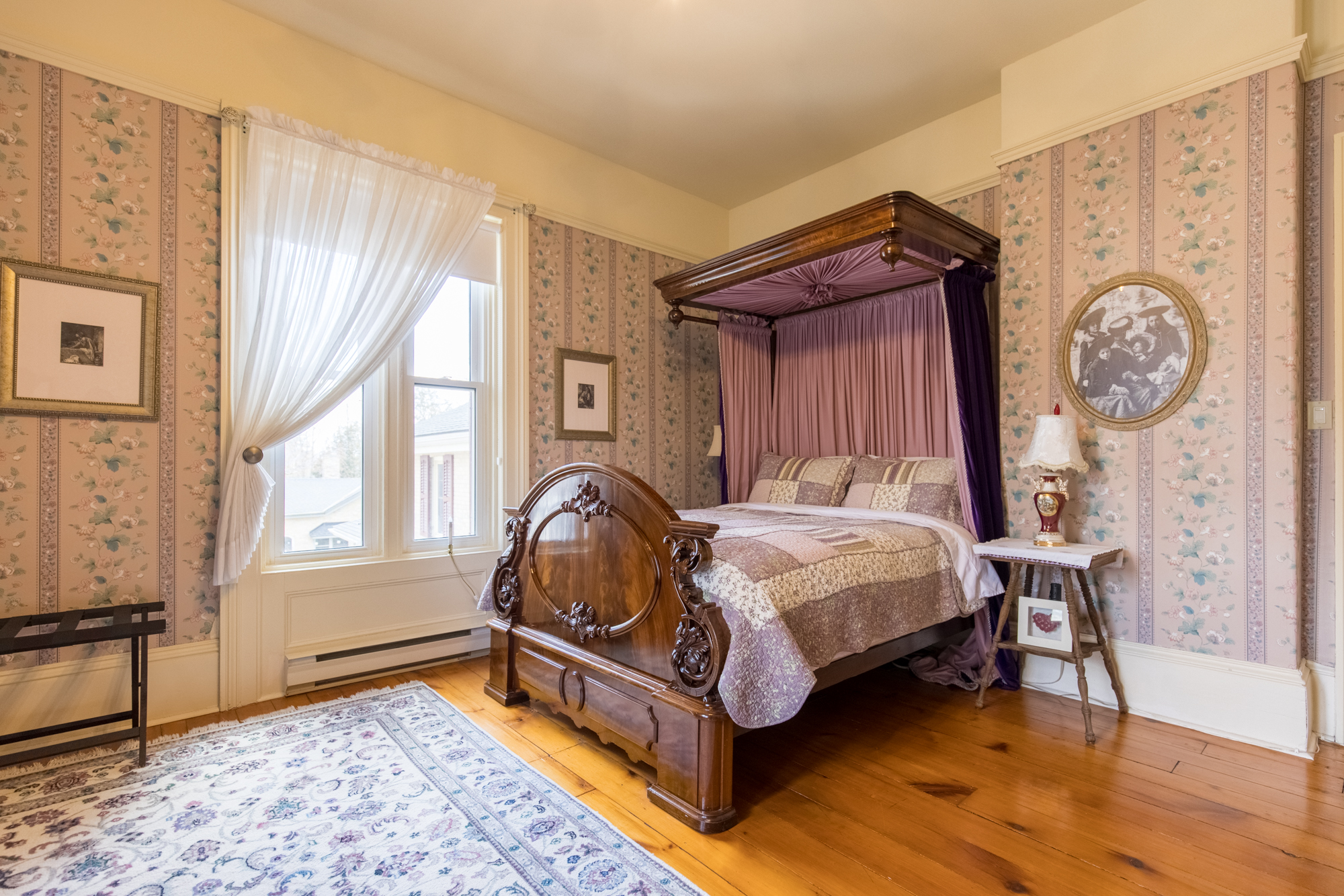 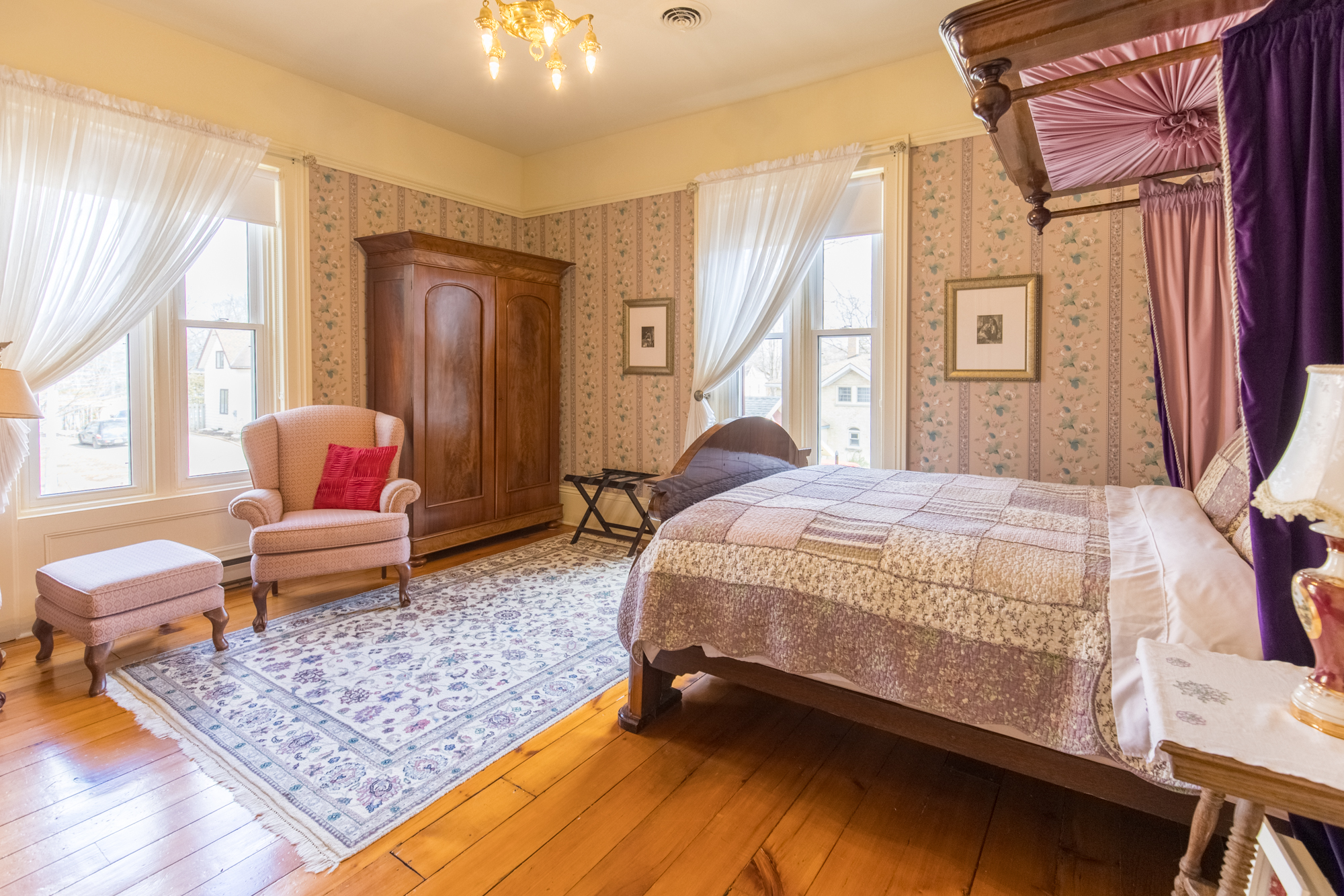 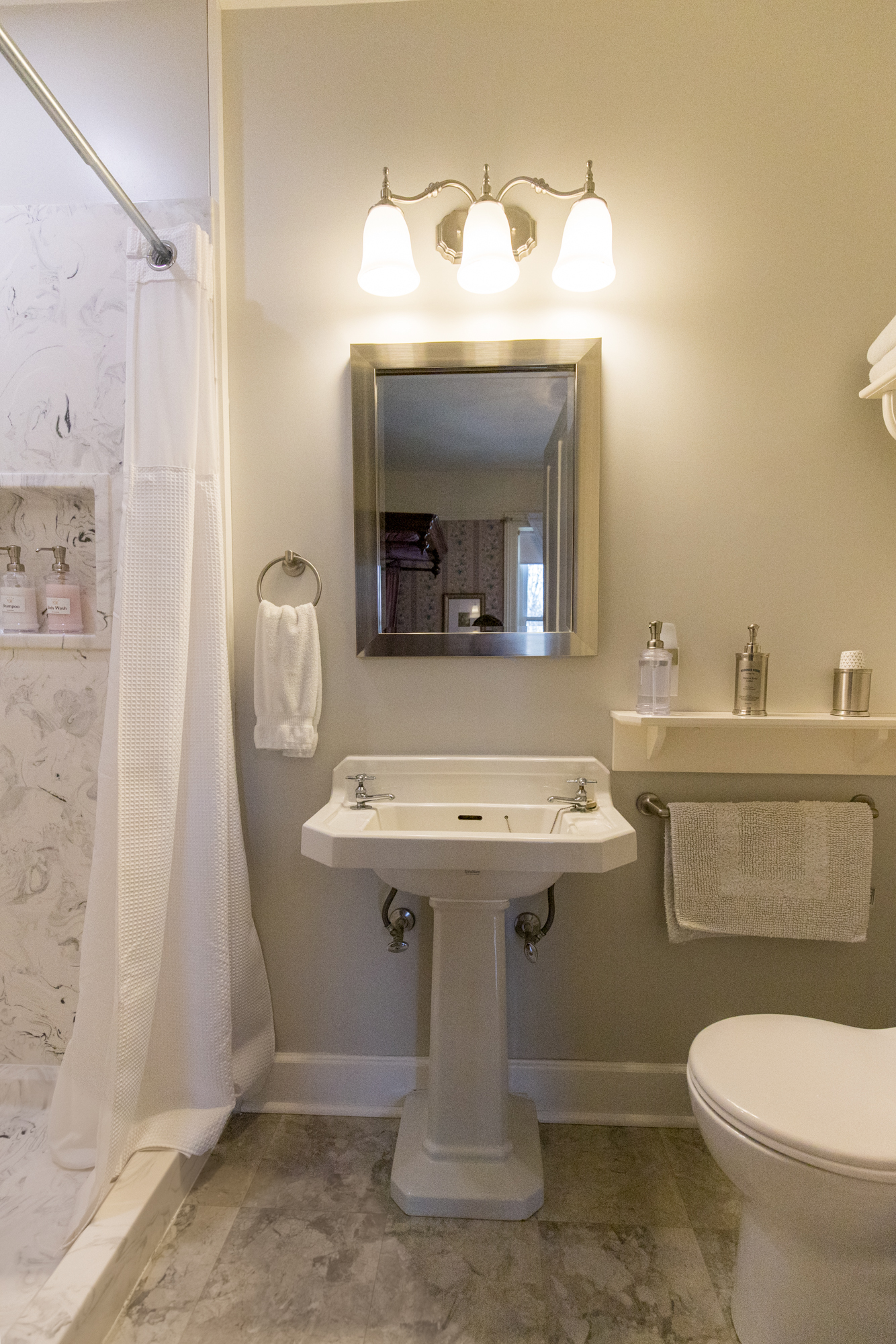 Remodeled in the mid 1980’s when the house was first converted into a bed and breakfast. The room is named for the German ambassador to Canada 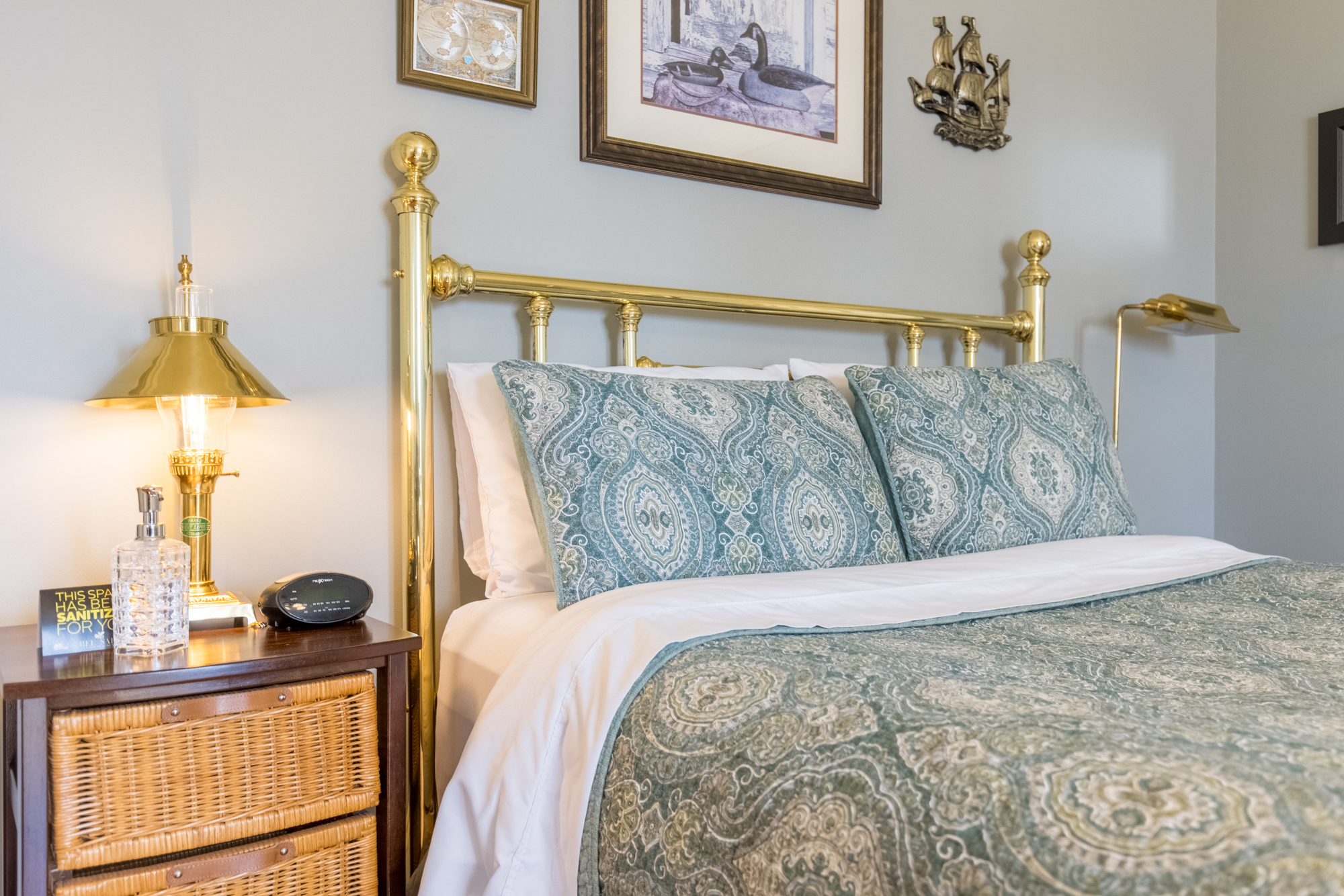 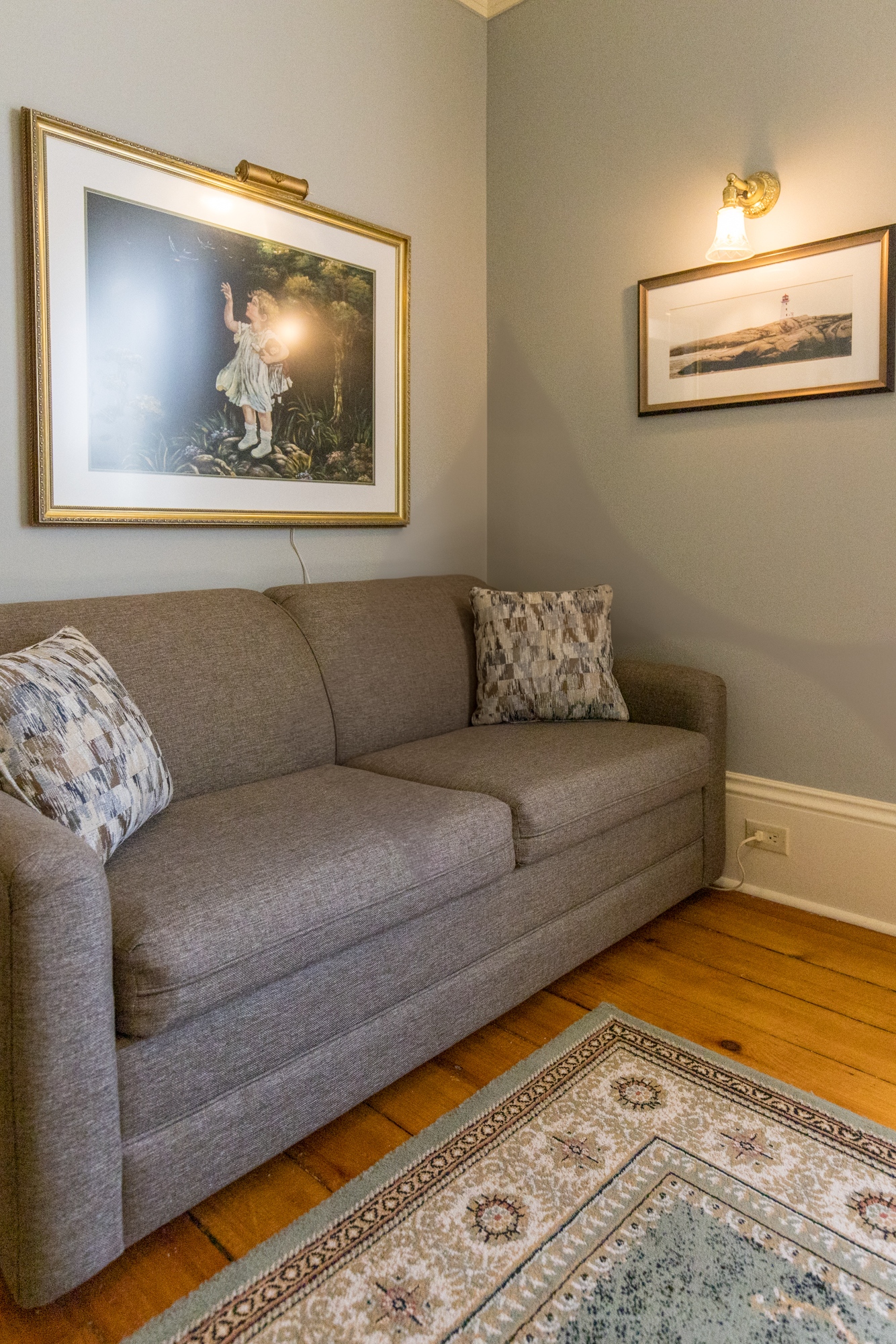 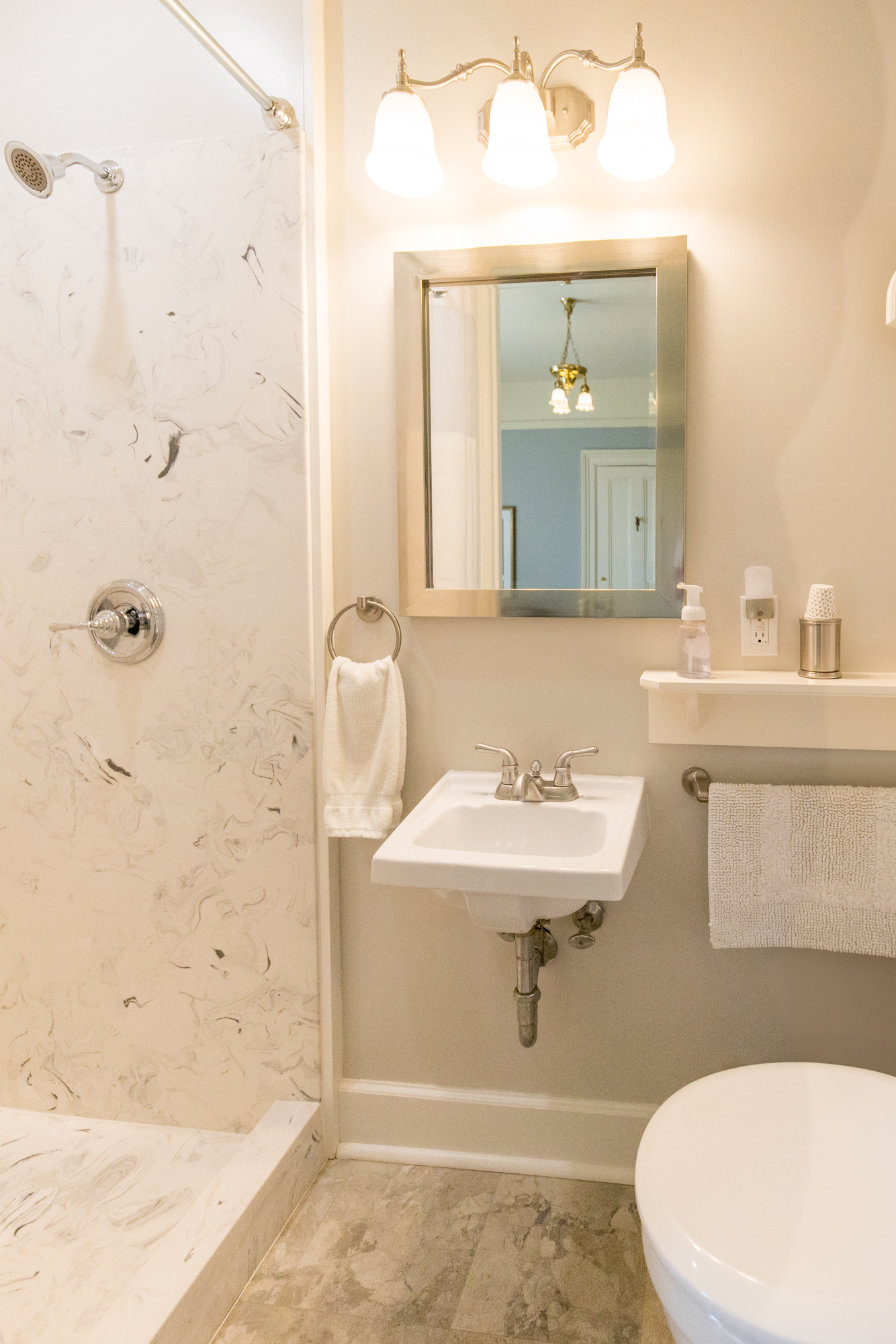 The Irwin Suite‎ is a new addition to our suite offerings. Originally the owners suite, with a view over the gardens and Pool.
CHECK AVAILABILITY

Exuding Victorian charm and stately elegance, Kildonan House proudly stands on the southwest corner of Kirk and High streets. At 150 years of age, Kildonan House was the residence of some of Clinton’s most prominent families. Not only is Kildonan House an architectural jewel in the heart of Huron, but it is one of the county’s most storied estates.

Kildonan’s story began with Richard Irwin who purchased the original five-acre property in 1867. Irwin was of an entrepreneurial spirit because, in 1857 at age 17, he moved from his birthplace near Galt to St. Louis, Missouri. In 1862, at the height of the Civil War, he returned to Canada and settled in Clinton where he ran a grocer until 1866. Irwin went into the dry goods business when he formed a business partnership with John Hodgens. It must have been a lucrative partnership because it is at this time that Irwin had the two-storey Italianate home was constructed.

When the home was completed in 1869, it was one of the area’s most majestic residences. The Ontario Heritage Trust in 1982 described Kildonan House as a “unique suburban villa” with a “main facade consisting of three bays, the centre of which projects forward and is surmounted by an ornate stone pediment.” Each corner of the imposing square structure “has raised brick quoins to create the rustic effect typical of the Italianate style.” Three pair of French doors on the main facade, Italianate windows on the upper floor capped by stone lintels marked Irwin as a man of substance and refinement.

With the exception of the removal of two fireplace chimneys and the belvedere which crowned the roof,

Unfortunately, Irwin’s first wife for whom the house was built died in 1868, one year before it was completed leaving Irwin with a two-year-old son, John.

In 1871, Irwin married Harriett Rippey, an American from St. Louis. Perhaps in honour of his second wife’s birthplace, Kildonan House was originally named Washington Place. In addition to son, John, the Irwins raised seven children at Washington Place. The 1881 census records an additional two servants residing at Kildonan to assist in running the household.

In 1872, Irwin went into the lucrative grain trade buying local wheat and produce and shipping it to the American market. However, Irwin lost much of his fortune when grain prices dropped in the 1890’s as a result of the opening up of the fertile prairie lands. He sold what was left of his grain interests in 1897.

By 1901, Irwin rented rooms to lodgers to supplement the household income. Despite the collapse in the Irwin fortune, the Huron Expositor described “the happiest family reunion that” Clinton ever witnessed occurring at the family home on Christmas Day 1902. When Irwin died in 1906, his obituary recognized him as “a man of the highest probity and honour.”

In 1909, Dr. William Gunn purchased the estate at auction from Irwin’s widow. Dr. Gunn, at age 54, was the county’s first surgical specialist. He founded Huron County’s first hospital in Clinton in 1902 and attracted medical students from across the province to learn the latest surgical techniques.

It was not until 1913 that the Gunn family took up residence in the house, preferring to rent it out to the manager of the piano factory. When the Gunn family moved in, the Clinton News Record noted that the Gunns “are making extensive changes and repairs” to the house and “when completed will make it one of the most comfortable residences in town.”

It was probably at this time that the home was named Kildonan after the Gunn’s Scottish ancestral home.

As active Presbyterian church members, the Kildonan house lawn was the scene of church bazaars and lawn parties. At one event in June 1914, the Clinton New Era reported that “the French windows of the drawing room and library opening on the veranda, made ideal spots for the home made cooking and needlework booths.” The manor’s mature trees provided “the shadiest nooks” for the “pretty candy booth” and refreshment stands.

Sadly, the Gunn’s youngest daughter, 14-year-old Bertha, died in the house after a brief illness in July 1914.

During the Great War, the Ladies’ Patriotic Society held 10-cent teas and bake sales at Kildonan to raise money for the war effort. Dr. Gunn closed his hospital in 1915 and served overseas as a military surgeon in Glasgow with the Scottish Red Cross Hospital. When he returned in early 1918, he established his medical practice in a room in the south wing of Kildonan.

After his wife Christina’s death in 1927, Dr. Gunn and a caretaker were the only occupants of the home.

When Dr. Gunn died at Kildonan in May 1930, the estate was used primarily as a summer residence for the families of his two surviving daughters.

A town council resolution in 1938 suggested that Kildonan House be used as an epileptic hospital. Dr. Gunn’s daughters thought if the house was sold, they would deed the two pastures and barn to the town for a public swimming pool. Nothing came of either proposals, as when the Second World War intervened, Kildonan House was used as a residence for instructors at RAF/RCAF Station Clinton.

In 1946, Leonard ‘Skip’ Winter purchased the Kildonan estate from the Gunn sisters. Winter, an ex-POW, and local businessman, rented apartments, sold automobiles and ran his real estate business on the estate.

In 1949, the newly-formed Huron County Board of Health leased rooms on the first floor for a five-year term. In 1952, Winter sold the land adjoining the property’s west end for the Royal Canadian Legion’s present hall.

After Winter sold the property in 1977, Kildonan House passed through a series of owners who used the estate for a variety of purposes from selling antiques to hosting weddings.

In 1982, Kildonan House was designated a Heritage Property and placed on the Register of the Ontario Heritage Trust. In the 1990s, Gene Vogel, a Ryerson University Registrar, and his wife Maureen, purchased Kildonan House and restored the home to its former glory and converted it into a successful bed and breakfast.

In August 2017, Bob and Janice Clark acquired the historic property and continue to maintain Kildonan House as a bed and breakfast.

Ironically, Bob Clark, whose son lives on Kildonan Crescent in Watertown, and has since discovered that Richard Irwin is a relative on his mother’s side. As Clark states “we are the stewards of the magnificent history of Kildonan House more than its owners.”

The history of Kildonan House has come full circle as an Irwin family member occupies the 150 year old estate determined to preserve its character into the future.